Posted by Wilmot Modular on September 7, 2017

Wilmot Modular Structures is a proud supporter of the 17th Annual Kernan Golf Tournament hosted by the University of Maryland Medical System. This year's tournament will honor Mike Wilmot, the President/CEO of Wilmot Modular Structures, and take place on Thursday, September 28, 2017. Mike has a passion for the mission of Kernan and has served on their board for many years. Proceeds from the tournament will benefit the Adapted Sports Program at University of Maryland Rehabilitation & Orthopaedic Institute.

When Mike was just 9 years old he was an involved in an accident that broke his leg. While receiving treatment for his broken leg, doctors discovered that Mike had a hollow femur bone. Mike was sent to Kernan Hospital, where he was treated and received a bone donation that saved his leg.

Ever since then, Mike has had a passion for Kernan Hospital and the organization that helped him in his time of need. Mike has served on the Endowment Board for several years and recently joined the full hospital board. Kernan Hospital, now named the University of Maryland Rehabilitation & Orthopaedic Institute, will always be a very important place to Mike and his family. As an avid golfer, Mike is thrilled to be honored and play at this year's tournament.

The 17th Annual Kernan Golf Tournament will be held at Bulle Rock Golf Course. Bulle Rock is widely regarded as the area's best player course and the number one public golf course in the entire state of Maryland. The pristine 235 acres of greens and fairways were designed by Pete Dye and boasts a wonderful mix of long and short holes that each add their own unique character.

Information about this year's tournament:

We hope you will join Mike and the Wilmot's in this year's tournament to celebrate Kernan Hospital! To register for the tournament, visit the 17th Annual Kernan Golf Tournament page and click the red "Purchase" button at the bottom. 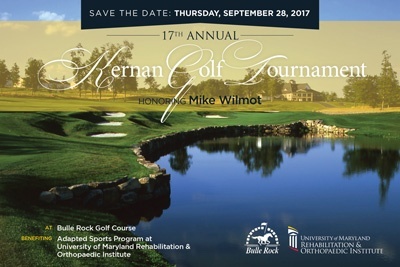